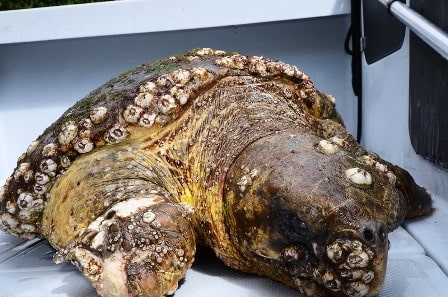 We often neglect Barnacles and focus on the colorful sea animals. But Barnacles are pretty fascinating to see. They cannot survive alone in the water. They need any hard surfaces

like rocks, trees, boats, wooden poles, and even turtles to survive.

But if so many barnacles are present on the turtle, you must remove them. It is because barnacles hinder turtles in breathing, eating, and seeing. Additionally, turtles find it challenging to swim in the water. Turtles may also be prone to infections because of excessive barnacles on their outer skin.

The article discusses more about barnacles and their attachment to the turtle’s skin. So, keep reading this article to know more about this information.

Barnacles are arthropods that belong to subclass Cirripedia and subphylum crustacea. So, these animals are related to prawns, lobsters, and crabs.

Barnacles are marine animals often mistaken for snails because of their shell. But in actual, they are crustaceans. Their body shape does not match that of crustaceans, but their lifecycle is similar to theirs.

Barnacles lay eggs and go through different larval stages before reaching adulthood. The larva of barnacles swim freely in water and secrete a sticky substance that they attach to any hard surfaces. Later they develop an outer shell that consists of numerous plates.

Most barnacles open their plates during tides and extend their feet to collect food from the water. Later they transfer the food particles from mouth to water.

These barnacles live for many years once attached to any hard surface. Their body wants constant water movement. So, they try to permanently attach to deep rock beneath the water or any animals continuously moving in water for existence. One such example is a turtle.

MORE POSTS: What to feed a 3-month-old golden retriever?

Most sea turtles you see are usually covered with an organism called barnacles. But that does not mean that these creatures are hurting turtles badly or turtles are in too much pain.

Barnacles try to attach to any marine animal, like a turtle. A minimal amount of barnacles in turtle shells is not at all harmful. But when excess barnacles are present, it can harm a turtle badly.

Barnacles may grow in the eyes of turtles, and consequently, turtles have a problem with vision. Excess barnacles can increase the turtles’ weight, which can further slow their movement in the water.

The turtle fails to catch its prey because of slugginess and finally falls sick. Moreover, if the barnacles grow in the mouth, the turtles cannot properly eat their prey. Excess barnacles on the mouth can even lead to infection.

In such cases, a safe procedure is followed to remove the barnacles from the turtle so it can live a normal life in water.

Does A Turtle Have Ways to Remove Barnacles?

Barnacles are always in search of rigid bodies so that they can live almost the rest of their life. Unfortunately, a turtle’s outer shell is hard. So, these barnacles use their shell to survive.

Turtles can remove a few barnacles with their flippers. Some barnacles fall off when female turtles have sex with their partners.

Can Turtles Have pain While Removing Barnacles?

Barnacles don’t have gills and hearts. They breathe by cirri and body wall. These creatures are so small that various marine animals do not even recognize their existence in their bodies.

Barnacles can even have an aerobic lifestyle, i.e., when the condition gets severe, they can survive without oxygen.

Barnacles require a hard surface to grow. So they try to attach to boats, rocks, and on animals like turtles.

But removing barnacles from the soft tissue regions of the turtle is quite painful. If you remove them, it can hurt the turtle shell badly. A minimal amount of barnacles are usually not advisable to remove.

Turtles live in seawater throughout its life. Their outer shell is hard; hence, barnacles find their shell an excellent way to grow.

MORE POSTS: Are dragonflies good for the garden?

She has an M.tech in Mechanical engineering from Pune University and is currently working as a Freelance Content Writer. She loves to write about animals and shares some of her thoughts on this website.