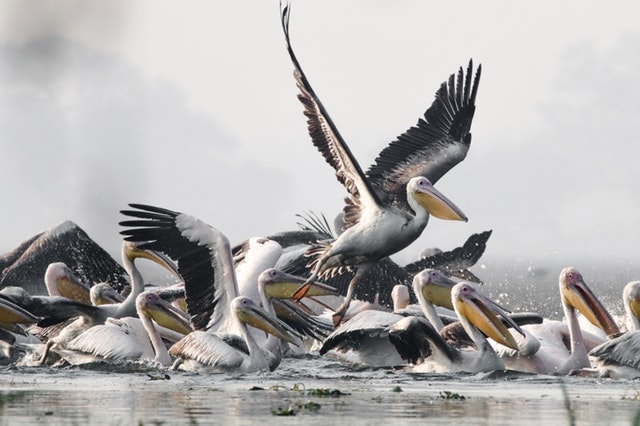 Bharatpur Bird Sanctuary which is now known as Keoladeo National Park is a vast bird sanctuary and former royal game reserve in the north Indian state of Rajasthan. South of the ancient city of Bharatpur, the park’s woods and man-made wetlands protect over 350 species of migratory and resident birds, including herons, cormorants and eagles. To the southeast, Fatehpur Sikri is home to sandstone temples and a mosque, built by Emperor Akbar in the 16th century.

It comes in the Agra-Jaipur Highway covering an area of 11.09 mi2. It also homes for a wide variety of animal species like Sambar, Chital, Nilgai and Boar.

Bharatpur Bird Sanctuary is popular for the migratory birds like Siberian Cranes, Pelicans, Geese, Ducks, Eagles, Hawks, Shanks, Stints, Wagtails, Warblers, Wheatears, Flycatchers, Buntings, Larks and Pipits, etc. They have chosen it as their nesting place as the sanctuary is protected from the human intervention. Adults of both genders have a pure white plumage except for the black primaries, alula and primary coverts. The fore-crown, face and side of head is bare and brick red, the bill is dark and the legs are pinkish. The iris is yellowish. Juveniles are feathered on the face and the plumage is dingy brown. There are no elongated tertial feathers as in some other crane species. During breeding season, both the male and female cranes are often seen with mud streaking their feathers. They dip their beaks in mud and smear it on their feathers. The call is very different from the trumpeting of most cranes and is a goose-like high pitched whistling toyoya. Pelicans are a genus of large water birds that make up the family Pelecanidae. They are characterized by a long beak and a large throat pouch used for catching prey and draining water from the scooped up contents before swallowing. They have predominantly pale plumage, the exceptions being the brown and Peruvian pelicans. The bills, pouches, and bare facial skin of all species become brightly colored before the breeding season. The eight living pelican species have a patchy global distribution, ranging latitudinally from the tropics to the temperate zone, though they are absent from interior South America and from polar regions and the open ocean. Geese are waterfowl of the family Anatidae. This group comprises the genera Anser (the grey geese) and Branta (the black geese). Chen, a genus comprising ‘white geese’, is sometimes used to refer to a group of species that are more commonly placed within Anser. Some other birds, mostly related to the shelducks, have “goose” as part of their names. More distantly related members of the family Anatidae are swans, most of which are larger than true geese, and ducks, which are smaller.