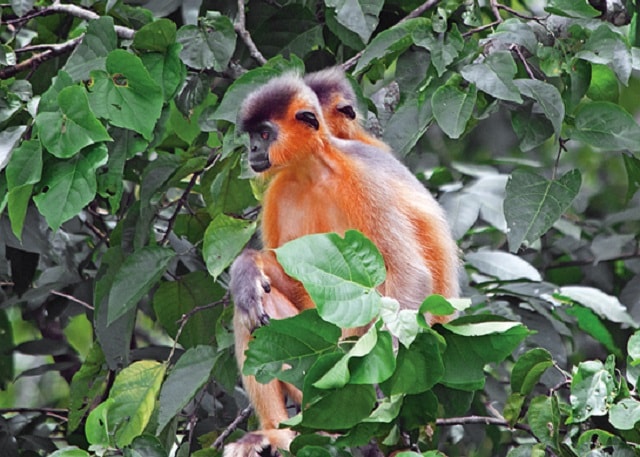 Here is the list of 20 endemic animal species found only in the Northeastern part of India. Northeast India is the hub of plant and animal species. Some of the endemic species are now enlisted as rare and endangered animals. In this list, we have included birds, insects, fishes, amphibians, reptiles, and mammals.

NorthEast India includes the seven states(Assam, Arunachal Pradesh, Manipur, Meghalaya, Mizoram, Nagaland, and Tripura) also called the seven sisters. As the region is perched with lots of mountains and rivers, makes a superb habitat for animals. A lot of species got loss in the past due to constant poaching. But, later on, government law enforcement and education succeed to decline poaching rates up to a certain level.

They are found in the rainforests forests of Assam. These primates mostly feed on green leaves, buds, twigs, flowers, and fruits and they are strictly arboreal.

These are found in the forests of Arunachal Pradesh. This species of Squirrel is nocturnal, an arboreal flying squirrel.

They are endemic to the rain forests of the Khasi Hills of Northeast India. Due to habitat loss, this bird is one of the threatened birds in India.

Found in the Sikkim and Arunachal Pradesh states of India. Named after a naturalist called Alexander Gammie who planted Chinchona plants in the region. The snake has alternating dark and light irregular rings on the body, the head is dark olive, and there are light spots in the center of most head shields.

Also known as the Assamese balloon frog or Assam narrow-mouth toad. A small-sized frog lives in the Grasslands and Terai forests of Assam, Arunachal Pradesh.

A flat-headed frog was found in the water-borne areas of Meghalaya.

This flying frog is found in the Suffry Tea Estate of Assam. Also known as Bordoloi’s Tree Frog.

This frog is named after Shyamal Kumar Chanda, a prominent Indian amphibian biologist found in the Nagaland state of Northeast India.

This amazingly looking green lizard is found in the forests of Meghalaya and adjacent borders of Bangladesh. They have two parallel rows of compressed scales on the head just above the tympanum. Also, an extra flap of skin on the side of the abdomen is seen. They can grow up to 12cm in length.

It is a rare species of agamid lizard endemic to Arunachal Pradesh and Assam. Commonly known as Abor Hills Agama or Annandale’s dragon.

The Northeast region of India is rich in greenery. The rainy forests of this part of India can be considered lung of India producing enough oxygen for the growing population. But, due to recent developments in the region more cities, towns are created causing destruction of forests. As many forests are being cleared every day, animals losing their habitats.

10 REASONS FOR THE DECLINING OF DRAGONFLIES POPULATIONS IN NE INDIA