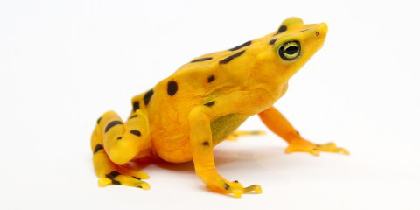 Panamanian golden frogs are the toad-like members of the Amphibian family with fascinating, rare, and beautiful allures. These frogs hold the prestigious position of natural animals of Panama. Many people keep them at home because they can bring good luck. Also, one can witness them at various tourist spots of Panama. The most unsavory trait of these frogs is their toxic skin.

Panamanian golden frogs feed on small insects and invertebrates. They are continuously declining, and the IUCN may soon label them extinct. To attract females, the male frogs use a waving sign, similar to human hand waving gestures. Read till the end to know many more interesting facts about these frogs.

1. What category of animals does a Panamanian golden frog belong to?

Panamanian golden frog, scientifically known as Atelopus Zeteki, is a toad-like member of the Amphibian family. It belongs to the Bufonidae family, and the prominent features are leather skin, profound dryness, and large bumps forming a canopy over the parotid gland. It holds the dignified position of the national animal of Panama, and it may soon become extinct in the wild due to the loss of habitat.

The Panamanian golden frog belongs to the class Amphibian and is also known as Cerro Campana stub foot toad. Amphibians are a group of animals that can survive in terrestrial and aquatic habitats. They have four limbs and are ectothermic.

2. What is the habitat of a Panamanian golden frog?

Damp areas are the habitat of Panamanian golden frogs, as they are tropical wet or dry montane woodland. These frogs are the prime residents of Panama. But they can also be located at various captive rearing spots such as aquariums and zoos. Many organizations are taking steps to conserve the wild habitats for the survival of these species. They have a life expectancy of 10 to 15 years.

3. What is the reproductive process of Panamanian golden frogs?

Panamanian golden frogs fertilize externally and are thus oviparous animals. Being Amphibians, they are capable of breeding in an aquatic habitat. Like any other frog, their existence consists of four categories, which are lava or tadpole, juvenile, sub-adult, and adult.

The breeding season of Atelopus Zeteki starts in late November and ends in the early days of January. They are adaptive to breed in continuous flowing water bodies like streams and reproduce uniquely. The male Panamanian golden frog competes after finding the desired mate. They establish their dominance over males and attract a female Panamanian golden frog by a waving sign. The winning male mounts the desired female from the rear end, a process known as amplexus. In the amplexus process, the male fertilizes the eggs. Thus, the female located a desirable place for laying eggs, a process termed oviposition.

Females release large eggs for external fertilization at shallow and shady water bodies. The eggs are prone to attack by many predators, and their large number ensures a steady population. The eggs hatch after 7 to 10 fertilization days, forming a white-toned tadpole. These infants change color within a few days, an adaptive feature to provide camouflage.

4. How do Panamanian golden frogs look?

Panamanian golden frogs belong to the true toad family. They have bright skin, slender limbs, a long head, and a smooth dorsal surface. It also includes minute spicules and pointed and bulging snouts. Their bodies have colors matching shades like yellow and brown, with a black patchwork. These vibrant colors are not present at the time of their birth. Tadpoles are black or gray, and they slowly transpose to green with black markings, and when they finally attain a flamboyant yellow color. This bright and shiny yellow-colored skin has fetched them the title golden. Both the genders resemble color patterns. Yellow color is an adaptive feature to warn or repel predators. The skin of Atelopus Zeteki possesses venomous glands that produce toxins like tetrodotoxin and Zetekitoxin. The yellow color symbolizes the danger of their dangerous skin.

5. What is the number of Panamanian golden frogs left in nature?

We cannot state an exact number to ascertain the population of Panamanian golden frogs. But, they are considered to be almost extinct in the wild. Presently, the population comprises the members living in captivity. Many organizations are taking conservation efforts in Panama to increase their number.

The IUCN Red List has categorized Panamanian golden frogs as critically endangered species, the group is at a high risk of becoming extinct. An amphibian fungus, chytridiomycosis, has adversely declined the number of these frogs. The additional threats to their survival are pollution and habitat loss. Various steps like captive breeding are taken in the Republic of Panama in Central America.

6. Is the Panamanian golden frog enormous?

Panamanian golden frogs are 35 to 63 mm long, on average. Females are enormous than their male counterparts. The female Atelopus Zeteki length ranges between 45 to 63 mm. On the other hand, the male length varies from 35mm to 48mm. They can run faster than a marathon runner, at a nine mph speed. Various frogs are more lethargic. They can dispatch their tongues at a rate as high as one mph.

7. How do they communicate with each other?

Panamanian golden frogs lack external ear openings. So communication is based on visual and tactile receptions. They can display waving, hopping, head twitching, stamping, leg twitching, and many more interesting displays. Semaphoring is a visual signaling technique that these frogs use for communication.

In the 1990s, zoologists observed a rapid decline in the population of Panamanian golden frogs in their natural habitats. Various organizations are taking steps to conserve this endangered species.