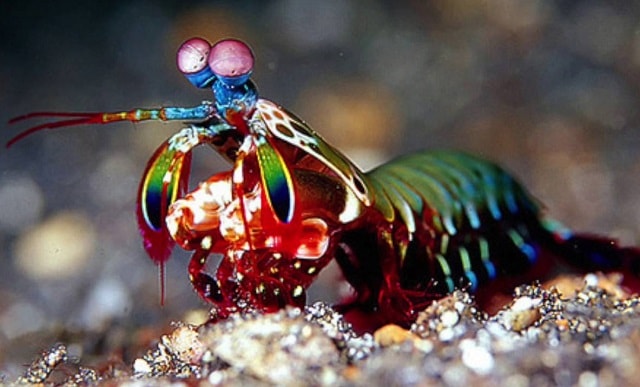 Found in the Indo-Pacific Ocean south of Japan and North of Australia in the depth of 30 to 40 meters. Peacock Mentis Shrimps are carnivorous. They have a nickname as punching shrimp as they have specialized calcified “clubs” that can strike with great power. The punch is so strong that it can break the hard-shelled hermit crab body.

The Peacock Mantis Shrimp is very colorful with hues of bright red, green, orange, and blue, and its forearms are covered in spots. At the top of its headrests a set of protruding eyes which can monitor the surrounding in 360 angles. The peacock mantis shrimp live in the holes of coral and rocks on the ocean floor.

1. It is the most colorful and vibrant shrimp.

Shrimp are decapod crustaceans with elongated bodies, long narrow muscular tails, long whiskers and slender legs. Shrimps can be found in different colors. Freshwater aquarium shrimps come in different colors and stripes on them. Some of them are snow white, red, blue, transparent, black striped, red striped, broad red and white striped. Whereas it is only the Peacock Mantis Shrimp which has vibrant colors from hues of bright red, green, orange to blue.

2. The mantis shrimp punch is fast enough to boil water.

Peacock mantis shrimp punch is so fast that it can break a glass and boil water. Researchers have found that the force with which peacock mantis blows its claws can cause cavitation in water and potentially boil water.

3. They can punch their enemies with the force of a .22 caliber bullets which is 50 times faster than the blink of a human eye.

A video published by National Geographic Channel shows the powerful punch of the mantis shrimp which is comparable to the force of a .22 caliber bullet.

If this shrimp’s punch is compared to a human punch, the human punch could break steel with that force of 500,000 PSI (Pounds of force per Square Inch). To break steel requires only 40,000 PSI.

5. Peacock Mentis Shrimp weighs only just 1/3rd of a pound though they have a punching force of 300 lb.

They are light crustaceans with sell made of light chitin. The average weight of mantis shrimp ranges between 15 to 90 grams.

6. It is impossible to keep them in a normal aquarium as they could literally break the glass with a punch. They are carnivorous too, they will literally kill other fishes in the tank.

As already mentioned peacock mantis shrimp punch is so hard that can shatter glass. They break the crab’s outer shells to kill and eat.

7. They live in U-shaped burrows in corals and ocean floor that they are hard to spot by a prey. 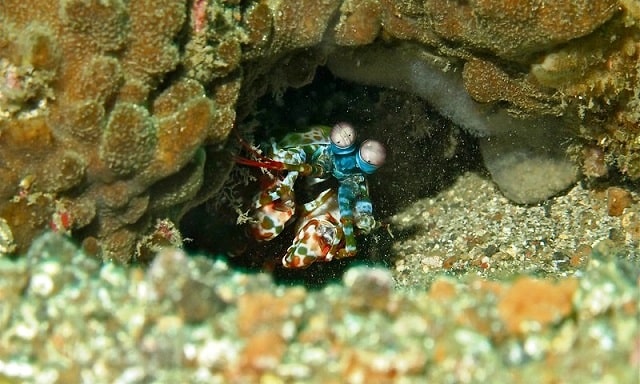 8. It is called Peacock Mentis Shrimp because of its color resembling a peacock.

9. It has two eyes with three focal points and each eye can rotate individually.

They have trinocular visions enabling them to sense any changes in the surroundings.

10. They can detect 10 times more color than humans can including ultraviolet lights.

You can read facts of other animals:

10 INTERESTING BUTTERFLY HABITAT FACTS THAT YOU SHOULD KNOW

Peacock Mantis Shrimp is an interesting sea animal. Its colorful body attracts the prey near to it. They feed on crabs, small fish, and other invertebrates living on the seafloor. Japanese people do eat mantis shrimp as sushi. Scientists Develop Mantis Shrimp-Inspired Sensors That Can Detect Cancer.